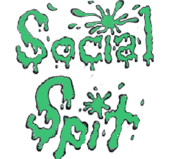 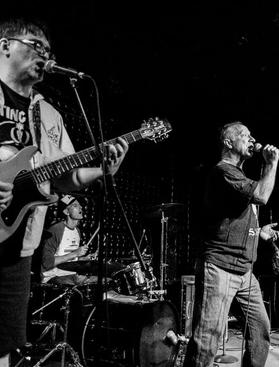 Formed as a new wave cover band in 1977 by Clairemont natives Bruce Hammerle and Fleminger, David, Bruce "Scabs" Atwell joined in 1979-80 and it went from a new wave cover band to a verified PUNK ROCK Band.  In Fall 80 Jonny V (XweAponX) joined and it was Scabs, Vocals, Jonny Guitars, Russ Weber, Bass, and Brian Watkins, Drums.In Early 1981 Scabs quit and "Social" Cliff Cunningham joined and the band gigged until Mid Summer 81, then broke up for 5 years until 1986 and then were joined by Skumdog, Drums, and Sean Diatribe, bass. Sean quit and was replaced by Mike VonGeitzen and the Psycho Ward EP was recorded.Some of the songs from the PsychoWard EP can be played at​iacmusic.com/SocialSpit

reverbnation.com/socialspit​In 1987 Mike quit and we kicked Skumdog out (big mistake) and replaced with Dave Nestor and Javier Vega, and the album "There's No Place Like Home" was recorded in 1988 but not released until 1991 (Like right after the band took a long hiatus).In 1998 Dave, Jonny and Javier recorded "Fiends like YOU" and played a few gigs without Cliff, in 1999-2000 Cliff played a few gigs, ending at Brick by Brick. In 2005 added Dan Skum, Drums, and Ugly Lenny Bass from Inciting Riots and some new versions of old songs plus a couple of new ones were recorded at Glen Taylor's before he moved to Florida. A few gigs were played from March to September, best one was in Escondido at Metaphor Cafe.In 2009/2010, reformed again for 30th anniversary, with Ugly Lenny and Jimi Flynn and in May '10 Javier Vega came back to Drums. So Shuddup!

In Mid 2013, Javier got married and had a baby and stuff, So he took a break - In the meantime, DUNCAN SCOTT,  was our 6th x10exp15 Drummer, until javier came back, after he got used to bein' a dad and stuff.

Actually after a break of almost 3 years SOCIAL SPIT came back (y'know. like that cat you dumped downtown but it found it's way all the way back home?) - For 3 shows in 2015 with our usual drummer Javier for one show and with our guest drummer Kris "Revulo-Chix" Roth. Then we played December 3rd (2015) at The Casbah in San Diego with The Avengers and some other bands. Hopefully we'll see ya in 2016! And we DID see ya in '16! Played a few great shows, w/DOA at Casbah, The Jim Rao Fan Club show and Denny Quick's Birthday. 2016 was great for Spit, but ultimately we all got FUCKED on November 8th. The MARCHING MORONS control the country now, weep for it, cos 2016 was the last year of anything GOOD we had. But, we started takin it back in November 2018, lookin forward to 2020. #FUCKDRUMPF.